The project, “1hr per m2: a student under my roof”, is an initiative funded and co-founded by BNP Paribas Swiss Foundation. The project has received the canton award for sustainable development with around fifty student/senior citizen pairings. The initiative aims to combat social isolation, while facilitating student housing solutions in Geneva. “1hr per m2: sharing with a student” was set up in 2016 by BNP Paribas Swiss Foundation, the organisation Pro Senectute and the University of Geneva.

More than just renting a room, “1hr per m2” is a true exchange between host and the student welcomed into their home. As its name suggests, a room of a certain size is made available in exchange for a few hours spent lending a helping hand: help with shopping, computer use, foreign language classes and more besides. But beyond this help, the programme brings a human presence to senior citizens and has a real impact on public health for this sometimes vulnerable population. Those aged over 70 years make up 40% of the programme hosts, and the majority live alone.

Students benefit from a lower cost room as they pay a fraction of normal rates. With these savings, students have more time to concentrate on their studies and build relationships with Genevese residents, since most come from abroad to study in Geneva. Additionally, all the rooms allocated through this programme in 2017 amount to around sixty rooms freed up for others – the equivalent of a small university hall of residence which now does not need to be built.

Following a 3-year pilot phase, the partnership between BNP Paribas Swiss Foundation, organisation Pro Senectute and the University of Geneva has been extended to 2021. In the first year, 23 pairings were made. By 2017 the number had doubled, with 53 pairs currently sharing a house. This success demonstrates that a real demand exists in Geneva, but also shows how much hosts and students enjoy living together. 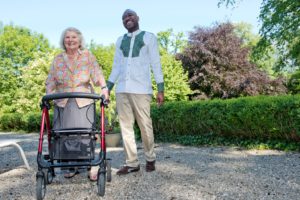 The canton award for Sustainable Development

Presented each year to initiatives run by public or semi-public organisations, this annual award contributes to the implementation of Agenda 21, a sustainability commitment made by the canton. Agenda 21 aims to support and encourage civil society to take action, both in Geneva and the cross-border area.

We use cookies on our website to give you the most relevant experience by remembering your preferences and repeat visits. By clicking „Accept all”, you consent to the use of all the cookies. However, you may visit Cookie settings to provide a controlled consent.
Read MoreSettings Reject allAccept all
Privacy & Cookies Policy
This website uses cookies to improve your experience while you navigate through the website. Out of these cookies, the cookies that are categorized as necessary are stored on your browser as they are essential for the working of basic functionalities of the website. We also use third-party cookies that help us analyze and understand how you use this website. These cookies will be stored in your browser only with your consent. You also have the option to opt-out of these cookies. But opting out of some of these cookies may have an effect on your browsing experience.
Necessary Always Enabled

Any cookies that may not be particularly necessary for the website to function and is used specifically to collect user personal data via analytics, ads, other embedded contents are termed as non-necessary cookies. It is mandatory to procure user consent prior to running these cookies on your website.

Analytical cookies are used to understand how visitors interact with the website. These cookies help provide information on metrics the number of visitors, bounce rate, traffic source, etc.

Performance cookies are used to understand and analyze the key performance indexes of the website which helps in delivering a better user experience for the visitors.

Undefined cookies are those that are being analyzed and have not been classified into a category as yet.